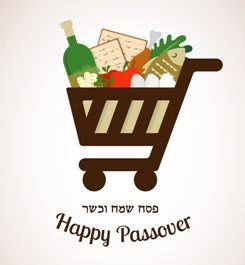 The intensity of the season is all consuming. Irrespective of how one spends their holiday, Passover is not just about that night. I couldn’t help but notice that one week prior to Purim or five weeks before Passover, some Florida kosher stores were already “turning over” to Passover. In one store, I couldn’t find any noodles for soup. Croutons were already packed away until after the holiday, as were many other chametz items. So it is by no means about that night or those nights. It is about a season and it seems to be getting longer each year. In many Brooklyn stores, there were still many regular products to be had, but there were also many aisles of the Passover goods.

So is there a right time for the “turnover.” I have always felt that Passover shopping comes in waves. The first wave is cleaning supplies and perhaps some basic cooking and baking ingredients. The second wave includes many canned goods, spices and even meats. The final wave includes perishables and some basic foods for the Seder. The first wave usually begins around Purim time, the second shortly thereafter and the final tide the last ten days.