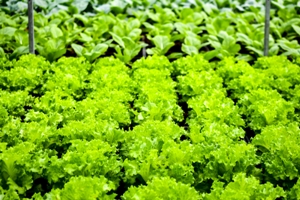 Ranana, Israel… Kosher consumers in the US may very well soon be able to watch their produce grow near their kosher supermarket. In fact, according to Guy Elitzur, the CEO of Vertical Field, “near” can be as close as the parking lot where a 40’ tanker/container would be growing a variety of leafy vegetables including lettuce, kale, spinach and herbs. The technology allows the produce to grow under simulated natural growing conditions, adjusting such elements as the temperature and light. One tanker, said Mr. Elitzur, could grow as much as 7000 heads of lettuce in just 27 days in all weather conditions. Most importantly, the new technology and the closed environment addresses the nagging problem of bugs, which of late has caused many consumers to shy away from purchasing such produce as romaine lettuce. For a generation of customers that covet fresh, the VBox technology, as it is called, is “spot on,” says one retailer. The vertical farming will mean that produce grown in the VBox will almost instantly be on supermarket shelves, cutting days out of transportation and processing. Vertical Field already has introduced the technology to at least one upstate New York restaurant and will soon launch the technology in a few select kosher independent stores in the New York area as well as to several supermarkets in Israel.