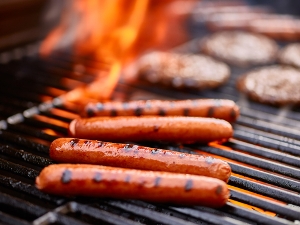 Cedarhurst LI…Howie Klagsbrun of Gourmet Glatt in Cedarhurst has noticed considerable growth in the number of kosher consumers who are involved in the “BBQ season.” He has also observed the trend to healthier options such as more chicken for grilling, chicken hot dogs, low fat hotdogs and more. Seth Leavitt of Abeles & Heymann, often credited with having the best glatt kosher hotdog on the market, says that “when everything is said and done, the full fat, full beef hotdog is still the hotdog of choice.” With the BBQ season now only days away, stores like Gourmet Glatt are preparing for the expected onslaught of customers who will be buying the A & H full line or such well known brands as Meal Mart and Solomon’s. Ads are already touting the quality of the dogs, sausages and the likes. For most of the supermarkets, preparation for the BBQ season is more than just having enough frankfurters and buns in stock. Mr. Klagsbrun rattles off a long list of items like utensils, brushes, spatulas, charcoal, and even includes fresh corn, watermelon and ices.

Mr. Leavitt has been observing a steady growth in the demand for hot dogs, so much so that he has added shifts and is currently producing 24/5. He points to Costco which initially ordered product for 9 stores and recently increased its order to nearly 20 stores. He sells some of his deli products at BJ’s as well. Several stores reached by Kosher Today noted that barbecuing has become a “must do exercise in communities with large families.” One retailer said: “They can’t afford to eat out but yet want their children to have the summer experience.”