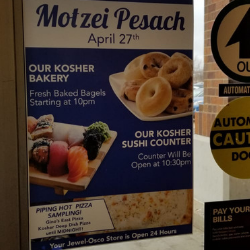 Chicago…Passover had just ended on April 27th and Jewel Osco was already inviting its customers to enjoy “fresh baked bagels” from its kosher bakery, sushi from “our kosher sushi counter” and piping hot pizza sampling. In Miami and elsewhere long lines formed at pizza stores. Many rushed to Publix and Winn-Dixie to buy frozen bagels and to restock cereals, cookies and crackers. Retailers refer to the restocking of pantries as being as intense as the eve of a holiday. Marianne, a North Miami resident stocked up on cereals, snack foods, and frozen bagels. There are no figures for the value of restocking but one retailer told Kosher Today that it equaled a weekday before a major holiday. Many stores were open through the night resetting their shelves with the chametz and in many cases putting their Passover foods on display as specials. What is always a formidable challenge for stores is to sell Passover items after the holiday. One retailer pointed to the yellow caps on Coke bottles and lamented that most customers would no longer buy the Passover Coke despite the products sell by date of three months down the road He also noted that many customers had complained that Coca Cola chose not to produce products like Diet Coke in cans for Passover. “They were really upset that they didn’t have the products for travel.” The stores also noted that manufacturers and distributors had learned to restock their shelves more quickly, with some stores being almost fully restocked within 72 hours. They credited better planning and quicker startup of production and distribution.