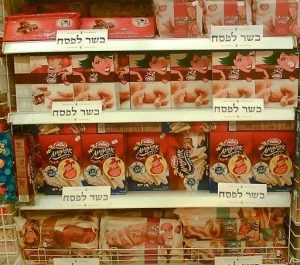 Monsey…With Purim behind them, kosher independent supermarkets and other grocers completed what some call the “turnover,” meaning that many aisles were cleared of year-round products to make room for the kosher for Passover foods. In some cases, special stores and tents were opened to accommodate many of the 55,000 kosher for Passover items that are available this year, an all-time record. More than 40% of annual kosher food sales take place around the Passover holiday, making it the most lucrative season for kosher.  According to surveys, “as many as 70% of American Jews participate in at least one Seder”. Planning for this year’s Passover included the fact that the holiday includes an almost week-long interim period (Chol Hamoed) with the prospect of heavy travel by kosher consumers. In stores like Evergreen, Season’s and Gourmet Glatt, there is an emphasis on the grab and go foods, particularly the growing number of kosher for Passover snacks. Many retailers were busy preparing to ship foods top such destinations as Orlando with the Grove kosher supermarket, based in Boca Raton, already planning hundreds of “deliveries.” Even stores like Glatt Mart in Flatbush were preparing to send several trailers of food to an expected 30,000 kosher consumers who will be in Orlando.