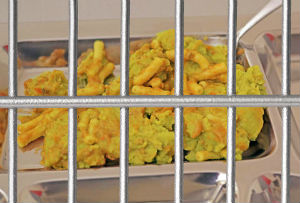 Rome, NY…What began more than a decade ago as a facility to provide New York State inmates who desired kosher with inherently kosher fruits and vegetables has evolved into a modern “full service” glatt kosher facility, under the supervision of the Orthodox Union (OU). “Full service” because the facility at the New York State Department of Correctional Services Food Production Center facility located at the Oneida Correctional Facility has expanded its kosher meal program to include hot meals including beef and poultry. For State Corrections officials the facility provides for a kosher certified food plant for the entire state prison system as well as a number of county prisons and also as a training facility for inmates who use their incarceration as a means of learning a food service skill that will make them more employable when they are discharged and return to civilian life.

For Rabbi Leonard Steinberg of the Orthodox Union and his team of mashgichim getting to this point took many years and much effort from such dedicated community activists as Abe Eisner. The program seemed to graduate from the lettuce and tomatoes to CAD (Cold Alternative Diet) to salads, thanks to the help from Sally Sherman and now with beef from such vendors as Alle Processing. The facility prepares more than 1100 meals weekly for inmates who request kosher, many who eat Halal and others who simply trust the cleanliness and quality of the kosher meals. But for the activists, this means that Jewish inmates who desire kosher no longer have to subsist on substandard meals or even “airline-type” meals. While the courts have consistently ordered correctional facilities to provide the kosher fare, the facility here is a major upgrade for inmates who were often sentenced to poor food, nutrition and hygiene.