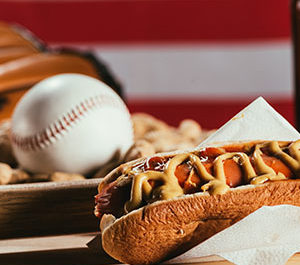 Anyone who has ever been to a major league baseball game knows that eating a hotdog in your seat while watching your favorite team is very much a part of the national pastime. So when I took my grandson to a Yankee game last week, the hotdog was very much part of the plan. After waiting for more than a half hour to clear security for the sold out game, I did not anticipate waiting another 40 minutes in line for the kosher hotdog at one of the Strikly Kosher stands at Yankee Stadium. By the way Strikly Kosher operates Glatt kosher food stands at Yankee Stadium, Giants Stadium and the Izod Center offering Glatt Kosher hot dogs, knishes, chicken wraps, nuggets and various snacks. It seems that the lines were longer than usual since many of the fans were headed to summer camps or bungalow colonies and this was to be the farewell game before the summer.

For my 9-year old grandson, it was worth the wait. While on line he was able to watch the game on a huge screen and when we returned back to our seats in the 5th inning, the Yankees began a miraculous comeback after a 5 run deficit. What caught my attention was that all of the other non-kosher food stands had virtually no lines. I am told that there are now kosher stands in 13 baseball stadiums around the country. It seems that baseball franchises are catching on: kosher consumers are huge sports fans. Several minor league chains also have kosher stands. I bumped into one baseball fan who said flatly: “We are still not being treated right. They give us either carts or small stands. It is about time that we are allocated the full space just like the non-kosher ones.” Oh by the way, the stands are also the meeting places for the Maariv services. At this stand the sign said flatly: “Maariv after the third out in the top of the Seventh!” For me, the bottom line was that my grandson had a great time, enjoyed the hotdog and cheered like crazy when Stanton hit a walk-off two run homer in the 9th.