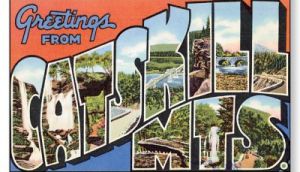 Monticello, NY…Well, it isn’t referred to as the Borscht Belt any more, the big hotels like the Concord, Grossinger’s and Brown’s are gone and so are the iconic Jewish comedians that all but got their fame from the Catskills. Instead, there are bungalow colonies, developments and camps that estimates say are home to some 300,000 Jews (a County source put the number at closer to half that number) over the summer. At the Shoprite and Wal-Mart, you can find all of the “heimishe” products and if not there is always the newly expanded stores like Mountain Fruit, Skopp’s and Landau. On this particular Friday, the stores with the large number of young families, were terribly overcrowded, albeit you can still have a fairly decent shopping experience (minus the long checkout lines) at Wal-Mart or Shoprite. There are many eateries here and the summer camps represent a significant chunk of business, serviced by such New York-based distributors as Quality.

No one is exactly sure how much kosher food is sold over the 10 weeks with guesses ranging between $25-$75 million. It’s a bit difficult to calculate since much of it merely replaces city sales. Some purveyors say that the summer business is worth about 25% more than it would for the same customers year-round in the city. Irrespective of what the correct figure is, it is a windfall for the industry.