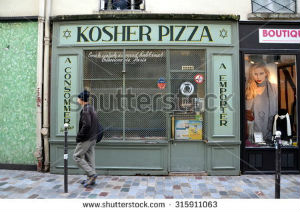 Intolerance seems to have found a new address, particularly when it comes to expressing anti-Jewish sentiments. Outrage, it seems, is best expressed against Jews who wish to consume kosher food. It has manifested itself in France, beginning with the 1982 horrific attack at Goldenberg’s which killed six or the 2105 attack at Hypercacher. Last December, a 29-year old Syrian asylum seeker holding a Palestinian flag smashed the windows of the glatt kosher Carmel Restaurant in Amsterdam and broke into the restaurant, for which he was later charged with vandalism. The shop owner, Sami Bar-On, decided it was irresponsible to keep the shop open without some form of permanent security.  There were the blood red swastikas painted on the windows of Simon’s Kosher Meats in Philadelphia.  There was the large rock thrown through the windows of Canada’s Mazal Tov Kosher Cuisine. And even Israel suffered greatly with several terrorist attacks in restaurants like the kosher Sbarro’s in Jerusalem.

No, I don’t think that armed guards should be posted at every kosher restaurant as it was for awhile in Jerusalem. Nor do I believe that people should stop frequenting kosher restaurants. Instead, let it be fair warning to the authorities that kosher food is as much a symbol of religious observance as the synagogue. They should also recognize that a strong Jewish community or even one with a large Jewish tourist base cannot survive for long without kosher eateries. Sad that we even have to mention this but it is a sign of very troubling times.