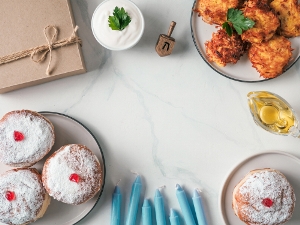 Brooklyn, NY….It was a Chanukah to remember for many kosher food retailers as some noted double-digit increases over 2018 by as much as 13% – 15%. Many stores consider Chanukah their third busiest holiday after Passover and Rosh Hashanah (High Holy Days). In most cases the sales growth was more likely to have been experienced by independent kosher grocers who dominate kosher sales in the strong Jewish neighborhoods across the country with a few exceptions in some markets. In communities where there has been little or no change in the demographics of Jewish residents, sales on Chanukah were said to be flat or even in decline.

Some kosher experts attribute the growth to the calendar as Chanukah this year fell in the middle of the widely celebrated holiday season. Kosher caterers in particular noted a surge in orders for holiday parties where in some cases the party was “a general office party.” Food distributors and manufacturers say that they have experienced steady growth in the past five years on holidays like Chanukah but they note that the growth is not evenly distributed with some markets doing dramatically better while others are stagnant.