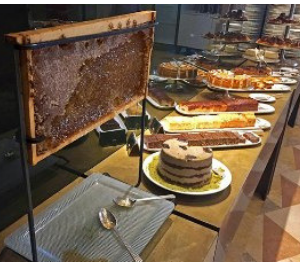 Jerusalem – He’s only 21 years old, recently married, and already creating his own cured and smoked meats as well as dishes the hotel kitchen has never seen before. Working the omelet station at the David Citadel Hotel, Avi was busy telling his impressive young life story to anyone who would listen. He likes the complete station because “it is a great place to be if you are a people’s person.” Avi is proud of the fact that in addition to a solid education, including stints at a yeshiva in Jerusalem, he has already been cooking for 18 years. That translates to his launching his career at the incredibly young age of 3. By the time he was 12, he already had his own catering business specializing in exotic soups.

It was 2 years ago that he was the first ever winner of the Kosher Masters Competition at Kosherfest, hosted by Joy of Kosher’s Jamie Geller. With hundreds of onlookers and thousands watching via live stream, Avi tackled a mystery box to create Panko-herb crusted lamb chops. Here’s what he used to create his winning entry: Herbs Pistachio, Custard Rack of Lamb with Ribbon vegetables sautéed—rendered in beef bone marrow and kielbasa sausages with orange gastrique. Avi got truly excited when he went through the ingredients and more so when he talked about his Facon sausages, beef jerkies and even his style of preparing chicken that he says he massages and treats, much like a human is treated in an expensive sauna.