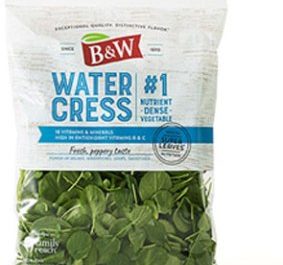 Fellsmere FL…Someone must have whispered in the ears of this 150 year-company that the kosher market of today is interested in their products like Watercress, Arugula, spinach, and red kale. Nikki Hartman, Marketing Manager for B&W Quality Growers is hoping to share its remarkable story with the kosher community at the upcoming Kosherfest (November 12-13, Meadowlands Convention Center) which opens next Tuesday. B&W is the world’s largest grower of distinctive baby leaves. Watercress or yellow cress is an aquatic plant species with the botanical name Nasturtium officinale. Watercress is a rapidly growing, aquatic or semi-aquatic, perennial plant native to Europe and Asia, and one of the oldest known leaf vegetables consumed by humans. “We follow the sun,” says Ms. Hartman who explains how the company grows its products in 8 states. Since obtaining the kosher certification of the Florida K, says Ms. Hartman, “the response has been awesome.” Its kosher customers were particularly excited over their extreme measures in washing and drying. B&W is distributed by a network of distributors and is sold in retail stores like Publix in Florida. “When people at Kosherfest realize how rich in nutrients Watercress is, we’ll make many new friends,” Ms. Hartman concludes.