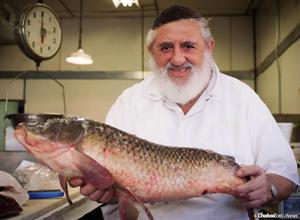 He was an iconic figure at the annual Kosherfest in the Meadowlands Convention Center but even more so in his neighborhood, Crown Heights. For decades, Raskin’s Fish Store on Kingston Avenue, which opened in 1961, was the quintessential kosher fish store with the almost always warm embrace of Reb Berel. For decades, Raskin’s Fish was a must stop for visitors particularly because of its extensive array of fish products that ranged from fresh fish to almost every type of kosher fish. His frozen gefilte fish loaves were a favorite of many even as the industry was expanding into multiple competing brands. He made sure to remind Kosher Today writers that he was constantly innovating new products. “You never tasted herring like this,” he would invite visitors to his booth at Kosherfest.