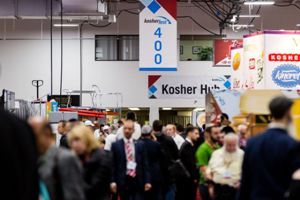 Food companies that produce kosher exhibit at Kosherfest for a variety of reasons, but mostly as an important event to help their bottom line, meet their existing and new customers, and showcase some of their new products. Forward thinking companies must also think of just how important this annual event for the overall profile of the kosher food industry. They must consider how important it is for the industry to showcase the state of kosher. Being part of the industry only enhances their ability to profit from being part of the show.

Some of the bellwethers at the show get that but some large companies do not. For example, despite the impressive Israeli pavilion sponsored by the Israel Export Institute, some major Israeli companies trying to do well in the kosher market are AWOL. One or two exhibited in the past but as a cost-savings measure dropped out. Several buyers openly asked me “Where is…?” They seem puzzled that these companies come knocking on their doors but don’t see fit to exhibit at Kosherfest. And then they wonder why their sales aren’t much greater. The answer is competition and the American companies have effectively been taking them on. Showing support for Kosherfest is not charity. It is an imperative if this industry is to continue to grow!