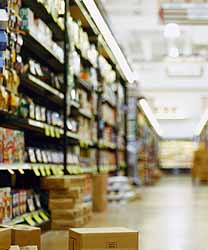 Chicago – An increasing number of kosher consumers want more than a smattering of kosher products on grocery shelves, even if has such basic items as dairy, meat and bakery. As an independent kosher supermarket, Hungarian Kosher in Skokie is a “one stop” kosher destination for many. Jewel-Osco recently upgraded its kosher section and continues to be a leading source of kosher for a significant number of Chicago area customers. The relative newcomer Mariano’s also competes for the “one-stop shopper.” But a new nearby Wal-Mart, say community leaders, has not fared as well despite its kosher offerings. The upshot of the Chicago experience is that when competing with fully stocked kosher stores, the discount stores like Wal-Mart may fall short in attracting the kosher consumer. Many of the discount stores say that they are fine with simply getting a share of the kosher business if that spells more sales in the rest of the store. Wal-Mart in Monticello does a stellar business in kosher over the summer months and also picks up significant business in the rest of the store. This, despite facing strong competition from a major kosher retailer like Shoprite. Costco fares well with its specialty kosher items, produce, and kosher family size items like jumbo Kedem Grape Juice bottles. It has been increasing its kosher offerings in many of its stores in primary kosher neighborhoods.

Many kosher food sources say that the trend towards “one-stop kosher shopping” was strong in the 2000’s but that given the many choices nowadays, kosher consumers are today “picking and choosing,” often shopping in some stores for  a good deal. In Flatbush, many consumers buy specialty kosher items at Pomegranate but seek out discounted items at stores like Moshe’s, Mountain Fruit and Shoprite.  Yet, say the industry sources failing to be fully stocked with kosher items “is an invitation to have your customer make you only one of several stops.”