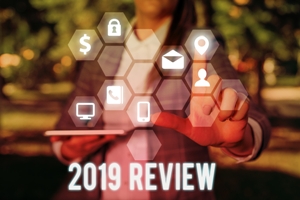 New York…2019 was a very eventful year for the kosher food industry, documented regularly in Kosher Today. Our big story of the year was the news that after several decades of revolving corporate ownership, the Manischewitz Company is back in a family portfolio, this time the distinguished Herzog family. Here briefly are the kosher stories that made headlines this year:

Latest Empire Sale Had No Effect on Kosher Poultry Industry – Empire Kosher was part of an $80 million sale by Hain Pure Protein Corp. to Aterian Investment Partners. In 2015, The Hain Celestial Group, Inc. said it had paid $57.6 million for the remaining 80% of EK Holdings, Inc. and its wholly-owned subsidiary, Empire Kosher Poultry. Estimates are that Empire slaughters an average of 80,000 – 85,000 chickens per day with annual sales of about $86 million. Empire remains the largest producer of kosher chicken and turkey in the US.

More than 90 New Food Exhibits Usher in Next Generation of Kosher at Kosherfest 2019 – Kosherfest 2019 was a huge success with more than 90 new exhibitors and 1,000 new buyers. Many were startups or companies from all over the US and indeed the world that are seeking store shelf space next to some of the established brands that are long-time exhibitors at Kosherfest. Some of the nations and major cities that exhibited were Israel, UK, Pakistan, Sri Lanka, Mexico, Brazil, South Africa, Dubai, Spain, and the Czech Republic.

Seasons Makes a Comeback – The independent kosher supermarket chain, Seasons, was lifted out of bankruptcy and acquired by a group of investors, led by the Bistritzky family. The group won the bid from Bankruptcy Court to continue to operate 6 of the chain’s stores, including locations in Clifton and Lakewood, NJ, Queens, Long Island, Inwood, and Scarsdale. Stores in Baltimore, MD and Manhattan were not included and a planned store in Cleveland was scrapped.

Bingo Opens Mega Store in Lakewood – Bingo, owned in part by the Osher Ad chain in Israel, opened its second store in the US, on Route 70 near the Home Depot. Lakewood has many grocery stores and chains like Gourmet Glatt, Season’s, and Evergreen but the Bingo option is rapidly becoming a favorite with the significant number of large families in the community.

Bimbo like Stella Dora Caved to Consumer Pressure and Continues Kosher Certification– Bimbo Bakeries USA, the largest baking company in the US, caved into public pressure which according to many by far exceeded the pressure on Stella Doro when it decided to end its Pareve program and to go dairy. The company ultimately renegotiated its kosher certification with such major kashrus organizations like the Orthodox Union (OU). Bimbo Bakeries USA, a subsidiary of Mexico’s Grupo Bimbo, entered the US bread market in 1997 and currently owns almost all of the baking brands in the US. They produce many well-known brands, including Sara Lee, Entenmann’s, Thomas, Freihofer’s and others.

DoubleTree by Hilton in Baltimore in Major Focus on Kosher – The DoubleTree by Hilton Baltimore North/Pikesville underwent a major renovation that included all of its public space and guest rooms. Included in this exciting initiative by its new owners, Blue Ocean, will be a special focus on the dynamic kosher community in the Northeast including the vibrant local Jewish community of Baltimore

6,000 Families Spend Passover in Orlando–A record 6000 families spent Passover 2019 in Orlando, competing heavily with hotel programs. The families largely stayed in many of the thousands of private homes in that they rented. Many local grocers as well as stores in the New York area supplied the food for the large crowd.

Meatless Upscale Foods a Blessing in Disguise for Kosher, Confrere Hears – The Meatless Burger was one of the new foods that is part of the growing trend for healthier foods, according to Dr. Tim Ryan, President of the Culinary Institute of America, one of the world’s most prestigious culinary institutions. Dr. Ryan’s comments were not lost on the kosher food experts in the audience who participated in a session “Kosher…It’s Not for Jews Anymore,” with presentations by Menachem Lubinsky, founder of Kosherfest and Rabbi Moshe Elefant, COO of the Orthodox Union

Kosher Takes Center Stage on Instagram; Reaches One Million Posts – During the week of June 11th the hashtag #kosher reached one million posts, a huge milestone for the kosher industry. Over the last couple of years, the kosher industry has systematically begun to appreciate the role of social media, according to Yarden Horwitz, a trend spotting specialist previously with Google.

Record Number of Kosher Travelers Take to Skies, Roads this Summer – Kosher travel internationally continues to pick up steam with travel experts noting that 2019 was a record season. Some experts are saying that kosher travel has more than doubled from 2015. Europe remains a popular destination despite increased anti-Semitism. Poland and Italy, say the experts remain extremely attractive with such cities as Prague, Budapest and Paris also faring well.

Even in Brooklyn Amazon is King; More Kosher Products Become Available. – According to Amazon, the company’s third-party sellers make up 58% of all sales on the site. But there’s an estimate passed around third-party Amazon consultants that claims 7% of all Amazon third-party sales originate from a single zip code in Brooklyn, and that Orthodox Jewish–owned businesses make up 15% of marketplace sellers. An estimated 19,000 kosher items are available on Amazon.

American Dream Include Kosher Food Court in Mega Mall – With such successful projects as Mall of America and the West Edmonton Mall in their portfolio, the Ghermezian family, originally immigrants from Iran, opened American Dream, a 90-acre mall and entertainment center. Orthodox Jews, the Ghermezian’s are doing their best to make the mega site a “kosher friendly” mall and attraction.

Wegman’s Features Many Kosher Products in New Brooklyn Store – For Brooklyn residents who keep kosher, there are a myriad of shopping experiences that they can enjoy, from such upscale stores as Pomegranate, Gourmet Glatt and Breadberry to the Costco-like kosher discount retailer Bingo in addition to Costco and Target which carry many kosher products. For supermarket fans, there is the huge Shoprite with its plethora of kosher options and Fairway with its interesting line of foods. Recently, Wegman’s opened a 74,000 square foot store in Brooklyn’s Navy Yard. Wegman’s will have a major focus on kosher.

Exports of Israeli Food Products to US Grow by 30% in 2018 to $282 Million – Israel Food Exports to the US reached a record $282 million, a more than $40 million increase since 2015. In 2017, exports reached more than $217 million but demand for the Israeli products has continued to rise. The North American kosher food market remains the most dominant part of the market for Israeli food products. Israeli sources are hoping that their quality food and wines will be expanded in US supermarkets as they have been growing in many independents kosher stores.

Kosher Community Responds to Jersey City Tragedy
Jersey City…The tragic shooting at the JC Kosher Supermarket and the murder of three innocent people, including the owner, Leah Mindel Ferencz, shook the kosher community. It was reminiscent of the tragic shooting of the Hyper Cacher market in Paris and the aftermath of Hurricane Imelda which pounded Houston. According to the New York Met Council on Jewish Poverty, more than 10,000 lbs. of kosher food were delivered to Jersey City by the agency. Donations of food also came in from New York City area stores and regional manufacturers. There are believed to be more than 100 Hasidic families living in Jersey City. The small grocery store served the fledgling kosher community but was shuttered in recent days because it was largely destroyed and the subject of a crime scene investigation.

Chanukah Gifts Headed for Record Sales, Retailers Say
New York…The calendar has created a huge market for kosher gift baskets, says one on-line gift store. Beginning just two days before the secular holidays, Chanukah gifts for both Jews and non-Jews is popular, “and of course kosher is right in the mix.” Traditionally when Chanukah and Christmas fall on virtually the same days, sales of kosher gift baskets soar, retailers say. Most stores are selling pre-packaged gifts and playing on the theme of “eight days of gifting” or a gift for every day of Chanukah. The cross-fertilization in society say the retailers creates a huge opportunity. Miriam will be going to her company’s holiday party but has bought kosher gift baskets for all 32 people that work in her department including many non-Jews. For most kosher supermarkets, Chanukah displays were already up 4 weeks in advance with many stores showcasing menorahs, candles, dreidels, and olive oil. But the biggestsales items appeared to be toys and other items suitable for family gifts. The stores were also selling the oil-filled “sufganiyot” and latkes (pancakes). Chanukah is the third major holiday for sales, following Passover and the High Holy Days. Chanukah begins on Sunday evening December 22nd.

Europe Still a Vibrant Kosher Market, K-Trade Founder Says
London…Ari Feferkorn believes that there is much life left in the European kosher market and to prove his point, he will be organizing K-Trade, a showcase for Europe on the kosher market. An American transplant, he has watched the explosion of kosher but come May 6th, he will showcase what he calls an extremely dynamic marketplace. When the show opens, it will include Menachem Lubinsky the brainchild and founder of Kosherfest as well as the worldwide authority on kosher, who will give the opening address. He, like Ari had to fend off the many skeptics who just “couldn’t see it” 31 years ago in the US. Ari believes that kosher is extremely vibrant in Europe, pointing to the large number of manufacturers who produce kosher on the continent, the hotels that have kosher kitchens and the supermarkets that carry many products but seem to hide the certification. Previous shows in the ‘90’s, he says, didn’t have the dynamics of a growing community as it is today. The UK is a good hub because of its very potent kosher community with its many kosher shops and restaurants.

While Not Uber Eats, Wolt Taking Israel by Storm
Tel Aviv…Ordering kosher food from a restaurant in Israel has become much easier with Wolt, founded in Finland in 2014 and now in 20 major cities. According to Globes, It began operating in Tel Aviv one year ago and has since expanded operations to Ramat Gan, Givatayim, Herzliya, and Kfar Shmaryahu is now expanding operations to Ramat Hasharon. Wolt is a food delivery app that makes it possible to make orders from restaurants and food businesses (including those that do not deliver food themselves) and follow the status of the order and the location of the delivery on a map in real time. The company began operating in Israel a year ago with 26 restaurants, and now works with over 500 restaurants.

TRANSITIONS
Rabbi David Hill Passes on at 98
Rabbi David Hill, a well-known Jewish activist who was a leading voice for the liberation of Soviet Jews passed away recently at the age of 98. Rabbi Hill was well known in the kosher community for his founding Real Kosher Provisions which he named 999 for its USDA number. Rabbi Hill and his children manufactured some of the finest kosher provisions in its legendary Lower East Side plant. He served as president of many Jewish organizations and even met several American presidents.