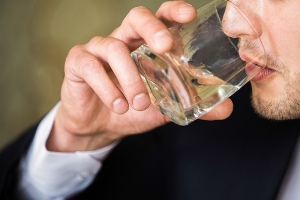 The modern-day version of security in a shul (synagogue) includes keeping the Torahs in a safe, but more recently some synagogues lock away their tzeddakah (charity) boxes and yes, alcohol left over from a Kiddush. In one shul, several teenagers were seen sneaking into a “locked” kitchen cabinet to consume alcohol left over from a party, leaving in a total drunken state. We live in an age where some of the most expensive bottles of wines and spirits are kosher. I have often celebrated the existence of so many quality wines from around the world that are kosher. I have friends that consider it a privilege to spend $200 and more on a bottle of good wine but they know their limits. Consuming moderate amounts of alcohol is very much a part of Jewish law, custom and tradition, but so is discipline and responsibility.

In a generation that has become accustomed to consuming better foods and wines, there is a need to control the young compulsive “alcoholics” who confuse our tradition with irresponsible behavior. Everyone enjoys a good Kiddush but no one is the happier seeing a drunken teenager on a Shabbat afternoon. Like everything else in life, moderation is an important word as is responsibility. While we are blessed with an unprecedented array of wines and spirits, this should never be confused with irresponsible behavior when it comes to drinking.