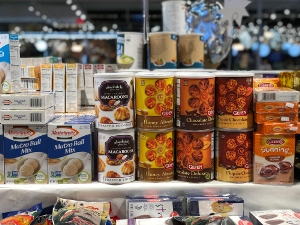 New York…They were known for a long time as “secondary” kosher markets, a far cry from such cities like Chicago, Miami or Los Angeles. Cities like Atlanta, Las Vegas, Houston, Dallas and Cincinnati sprung to life on the eve of Passover but otherwise were not amongst the most dynamic kosher markets. Supermarkets in those cities adapted to the lifestyle of secular Jews by offering a “full set” for Passover but otherwise maintaining a small kosher section with the usual compliment of Matzoh, Grape Juice, Yahrzeit candles, chocolates, and perhaps borscht. But all that may be changing as a new generation of kosher observant Jews moves into some of these communities and revives the dormant markets. Many of the new arrivals are young couples looking for less expensive housing than is available back East, a better job market and a lower standard of living. While these changes are happening, many community leaders say that the supermarkets have not yet “caught on” and are still showcasing the meager kosher set. The leaders say that the supermarkets have a huge opportunity in attracting a loyal kosher consumer that when offered more than a handful of SKU’s will shop the entire store and spend as much as $17,000 a year for a family of four as opposed to a non-kosher customer who will spend $10,000 less.