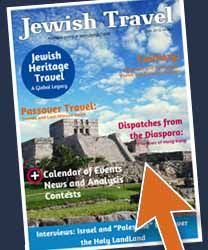 Jerusalem – Israeli hoteliers are expecting a banner Passover season because of the ideal weather conditions in late April and the long interim period (Chol Hamoed) that will facilitate tourism throughout Israel. But the story this year is the expected 125,000 Jews who will be travelling to some 250 destinations that include some of the world’s most luxurious resorts and destinations like Shanghai, China, Puerto Rico, Spain, Italy, Austria, Transylvania, Costa Rica, Bahamas, Portugal, and, of course, many major resorts and hotels in the US, Israel and Canada. Two new additions of note will be Club Kosher in Puerto Rico, with host Elan Kornblum of Great Kosher Restaurants and Avi and Shneuer Faskowitz’s program at the Rosen Plaza in Orlando. In addition to having former Senator Joseph Lieberman and his wife Hadassah as guest speakers, Club Kosher will be the place for kosher foodies. The Faskowitz program (Majestic) is notable because it will be held in the Rosen Plaza Hotel, which now boasts a year-round glatt kosher kitchen in one of the nation’s leading tourist destinations, Orlando. It will also feature the noted Jewish leader Malcolm Hoenlein as well as Menachem Lubinsky. This is the peak of the advertising season for the programs who hope to exceed the successful year they had in 2015. Some travel and kosher experts suggest that when all is tabulated, it exceeds $1 billion.