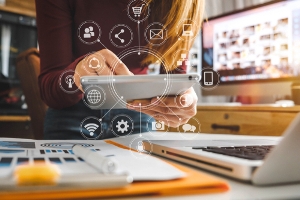 New York…An increasing number of kosher companies are adding digital marketing to their marketing program with a great deal of success. According to the London Times, digital marketing is “the marketing of products or services using digital channels to reach consumers with the key objective being to promote brands through various forms of digital media.” But the Times expands the definition to include “channels that do not require the use of the internet.” They include mobile phones (both SMS and MMS), social media marketing, display advertising, search engine marketing, and any other form of digital media. In social media, Instagram has become a major source of connecting to a new world of tens of thousands of kosher foodies. The use of video on social media, including You Tube, has significantly raised the bar for exposure for kosher brands. A recent video by Norman’s generated 20,000 views within hours. Portals like Kosher.com and Joy of Kosher have also generated tens of thousands of followers, especially for cooking shows and demonstrations. While some social media vehicles like Instagram have captured the lion’s share of the engagement by kosher consumers, other channels like Facebook and Twitter also generate some response, albeit significantly less. An important development is the rapidly rising number of core kosher consumers, including the most Orthodox, on social media.

Digital is also slowly creeping into kosher retail as some large kosher independents now report that 3%-5% of their sales is done on-line. Shopping on-line in general has developed ever so slowly with most consumers still opting for store shopping. In 2017, 31% of U.S. consumers were likely to buy groceries online. In total, U.S. online grocery sales were at about $14.2 billion and are expected to rise to nearly $30 billion by 2021. Even the world of kashrus continues to evolve as many of the large agencies have apps where consumers can check the kosher status of products. An increasing number of kosher companies are resorting to digital marketing, which the experts say can be far more targeted than conventional marketing vehicles. With a more engaging website, effective SEO program, and well executed social marketing program, the results can be significantly higher sales.