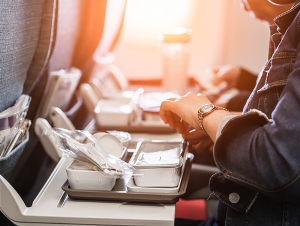 New York…Despite still being a small fraction of all meals served aboard airlines, the number of kosher meals served by carriers has increased by 40% in the past 5 years. In a survey of major carriers and kosher caterers, the number of kosher meals continues to increase as a growing number of kosher adherents travel. With very few exceptions, all air carriers offer the kosher meals although travelers differentiate between the quality of the various caterers. Most frequent travelers, for example, cited Hermolis in London as being amongst the best with other caterers such as Bornstein’s, Regal, Masbia and Tamam also receiving good grades. The survey found that kosher represented 10%-12% of all special meals ordered by passengers. The steadily growing number of flights to and from Tel Aviv has also meant increased business by such caterers as Tamam and Masbia. One travel expert said that a number of non-Jewish travelers also ordered the kosher meals out of a belief that the meals were better