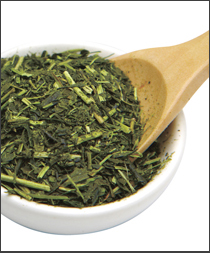 CHICAGO — A mystery of how gluten could have found its way into Green Tea continues to stump kashrus officials, according to Rabbi Sholem Fishbane of the cRc, who also heads the Association of Kashrus Organizations (AKO). It was just before Passover last year that the KVH kosher supervision agency reported that they tested a few samples of green tea and found parts of gluten in half of them. Some theories were advanced  as to how the tea came to be contaminated, but no Mashgiach who visited a tea farm or factory was able to substantiate any of these ideas. With any lack of evidence, the kashrus agencies did not change their policies based on these tests. This year,  the cRc sent 15 samples of tea to be tested for gluten, and found small traces of the gluten. Sampling was done on the tea leaves while still in the tea-bag, rather than on steeped-tea. The samples included teas wrapped in foil, paper, or nothing at all; with or without strings, staples, and glue; sewn and knotted bags; with and without hashgacha for Passover; and with and without gluten-free claims; and there did not seem to be any pattern to which ones had gluten.

One of the brands which was tested and certified for Passover sported a gluten-free claim, but was found to have parts per million of gluten in two of the three varieties that were checked. The agency certifying that brand of tea had previously investigated the paper, string and bags used, and found that they did not pose any possibility of chalets contamination. They spoke with the tea company who assured them that there is nothing added to the raw/fresh tea leaves once it reaches the processing plants, and the best explanation they could give for the gluten found is “Green tea is picked by small stakeholders during the specific seasons. The stakeholders may grow grains and other produce items, and transport conveyances may be used for items other than green tea.”