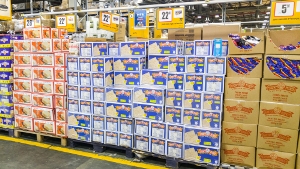 Tel Aviv…Israel Food Exports to the US have reached a record $282 million, a more than $40 million increase since 2015. Sources told Kosher Today that Israeli manufactured products are now routinely a major part of the kosher food set. Many leading brands in the kosher food market import products from Israel. Most of the exported foods are kosher certified in Israel with many also adding a US certification. The sources say there was a major increase in such items as snacks and matzah which helped drive the surge. In 2017, exports reached more than $217 million but demand for the Israeli products has continued to rise. The North American kosher food market remains the most dominant part of the market for Israeli food products. Israeli sources are hoping that their quality food and wines will be expanded in US supermarkets as they have been growing in many independent kosher stores.