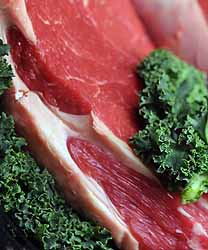 Madison, MN – PM Beef Holdings, a major source of premium glatt kosher beef, is closing its beef processing plant. PM was unique in that it was one of the few plants in the US that produced prime cuts, fulfilling a growing demand in the glatt kosher market. Dallas-based A.D. Rosenblatt was the latest glatt kosher company to slaughter the quality beef at PM. Yaakov Rosenblatt was hoping that the closure will have a short-term effect on supply. He was banking on the plant either being acquired or that he would find another source of slaughtering the high quality beef.

PM has been facilitating the slaughter of kosher beef for more than three decades. The first to slaughter glatt kosher was International Glatt of Brooklyn. Hebrew National subsequently slaughtered there as well for a time, albeit not glatt. Sources told Kosher Today that in the past year, approximately 1100 cattle were slaughtered at the plant weekly with about 400 being glatt kosher. The PM closure was the latest in an industry hit by smaller cattle herds across the U.S. simply reducing the supply of beef that is available to the slaughterhouses. Other beef-processing plants have also closed in recent years. As a result of the shortages, the cost of beef had skyrocketed, although as the industry continues to add cattle, some prices have dropped recently. Demand has risen in recent years for the premium beef. Many of the upscale stores like Pomegranate, Gourmet Glatt and Evergreen sell the higher quality beef. Industry sources say that many younger affluent kosher consumers covet the prime cuts, despite its higher cost.