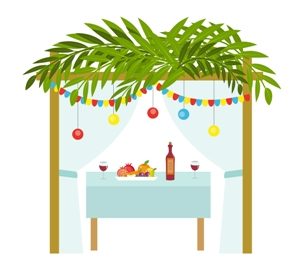 Lakewood NJ…The growing kosher community has a myriad of options for shopping, including branches of such stores as Gourmet Glatt, Evergreen, Season’s, and Bingo as well as many long-time local stores. Yet, Lakewood residents spoke of crowded stores and long checkout lines in the days before the recently concluded holiday of Sukkot. These scenes repeated themselves in many stores in Brooklyn as well as Monsey. In a survey of kosher retailers, sales on average were said to have increased by 8% – 10% with some saying that they experienced double-digit growth. “There were many meals during the holidays which always is good for business,” said one retailer. Many of the stores said that they experienced sporadic shortages, specifically on some meats and in the dairy case.

It was also a big season for travel as an estimated 50,000 people travelled to Israel for the holidays. One popular destination was the David Citadel Hotel in Jerusalem which seemed to win back clients it had lost in previous years to the luxury hotel Waldorf Astoria. Popular amongst the Israel holiday travelers was travel through Europe with Turkish, Lot and Austrian Air being primary carriers. One group of travelers on Norwegian Air were stranded in Barcelona on their return to North America. Weather was a factor in many countries blowing away some Succos. Central Israel had a rare windstorm as did New York, Toronto and some areas in Florida. Hundreds of vacationers rented homes in Orlando, a popular vacation model during Passover as well.