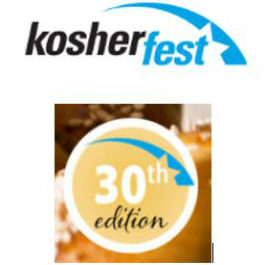 Secaucus NJ…Kosherfest 2018 opens tomorrow (November 13th) at the Meadowlands Convention Center as the kosher food industry continues to gain strength with its ongoing  estimated growth of 10% – 12% per annum since 2013. More than 6000 people from some 21 countries will attend the two-day event which this year will celebrate its 30th anniversary since its humble beginning at Giants Stadium in 1989. Kosher foods are now widely available throughout the US with as many as 18,000 retail stores selling kosher products. This year’s Kosherfest will honor exhibitors who have been part of Kosherfest throughout its 30-year history. Produced jointly by Diversified Business Communications of Portland ME and Lubicom Marketing of Brooklyn NY, the show will include some 340 exhibitors and well over 400 booths.

As the premier annual event of the kosher food industry, a great deal of focus will be on the upcoming Passover holiday in April when some 40% of annual kosher food sales takes place. Many new products will be introduced for the first time at the show, especially for Passover.In addition to the rapid expansion of kosher in retail, namely by the nation’s largest supermarket chains, a network of kosher independent supermarkets, and many discount chains, foodservice will be an important part of the show. Foodservice sales have grown steadily with catering, restaurants and education leading the way. There will be a special session on kosher food service, led by Tim Brown, a former Vice President at Sysco.

Winners of the New Product Showcase will be recognized at the opening ceremonies which will include the State of the Industry address by Menachem Lubinsky and a presentation on kosher trends by Yarden Horwitz, formerly of Google. This year’s Best in Show winner was Easy Onions by Bloom’s, winner of the best in the Condiment category was awarded Best in Show. Yakov Yarmove of the Albertson’s chain, a judge in the competition and a noted kosher expert considers the Easy Onions a sign of a rapidly growing “convenience segment of the market.”