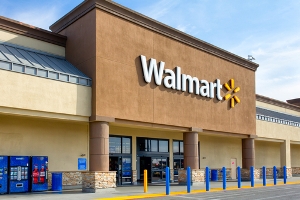 South Fallsburgh…With less than two weeks to go before the summer season ends, grocers in New York’s Catskill Mountains were already calling it a “huge success.” Some of the most successful grocers were markets like Landau’s, Buy-Rite, Mountain Food, and chains like Shoprite and Wal-Mart. The latter stores continue to significantly upgrade their kosher offerings, resulting in “solid revenues from just 10 weeks of sales,” said a kosher distributor. The stores are increasingly catering to a Chasidic base with their ever-increasing family sizes. Many of the products include certifications from Chasidic groups and in dairy the items are all chalav yisrael. For stores like Wal-Mart, the expanding kosher section means attracting the Orthodox shoppers to buy the entire store. Yossi bought 5 kosher items but walked out with a $200 bill because of the other items he bought. The Monticello Wal-Mart had a full complement of kosher foods, including many end caps and refrigerated and frozen items. Yossi said that he could have shopped his full Shabbos order at Wal-Mart but didn’t realize just how many “heimishe” products they carried. Back in South Fallsburg, Landau’s large parking lot was full on a mid-August Sunday called “visiting day” for summer camps. Parents stocked up on food for their children. In just eight weeks, millions of dollars were recorded by the 10-week industry!