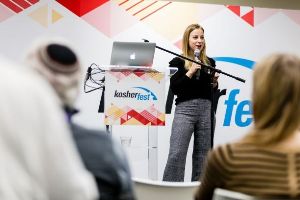 Secaucus, NJ…On-line interest in kosher foods is soaring, according to Yarden Horwitz, a former trendspotting expert at Google and co-founder of SPATE. Speaking at the opening session of Kosherfest on Tuesday November 13th, Ms. Horwitz revealed that Google searches on kosher grew by 13.5% between August 2017 and August 2018. She noted that there were seasonal spikes such as before Passover where Matzoh is naturally a subject “but so was kosher for Passover beer.”  Food trends that have taken hold in the mainstream food market seem to have gained traction in the kosher market as well. Ms. Horwitz noted the popularity of Keto foods which are high protein– low carbohydrate foods that are now available in many categories including snacks and even pizza. There has been a 98% growth in Keto snacks. Other notable trends in kosher that mimic the greater market are the attraction to “superfoods” and “food makeovers.” One makeover category is the fascination with “bowl foods” including ACU, Poke, Playa, Buddha, and even egg rolls. “More and more consumers are turning to superfoods as a way of dealing with increased anxiety. Experts define superfoods as popular must have foods in today’s diet. Some examples include dark leafy greens, berries, green tea and legumes.