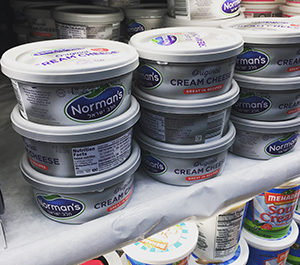 Rutherford NJ…Just when some kosher consumers were preparing for the cream cheese schmear on Matzoh this coming Passover came a striking introduction by Norman’s Dairy. The Chalav Yisrael (higher standard kosher dairy) introduced a new cream cheese spread that was in most cases less than half the price of other brands including Philadelphia in some stores (as low as $2.18 in Walmart). By comparison to Norman’s, an 8 ounce J & J cream cheese at KRM in Boro Park sells for $4.29 and at nearby Gourmet Glatt for  $4.69. The Givat brand (by Mehadrin) sells at KRM for $3.99 and at Gourmet Glatt for $4.69. A spokesman for Norman’s, which own its own exclusive Chalav Yisrael plant here, said the new lower priced cream cheese was the company’s effort to “bring quality products to the market at affordable prices.” It was Norman’s that first introduced Chalav Yisrael Greek Yogurt products. Several retailers reached by Kosher Today did not expect a cream cheese price war like what transpired with Greek Yogurt. To assure that retailers would not mark up the price beyond the $1.99, Norman’s printed the price on the lid.