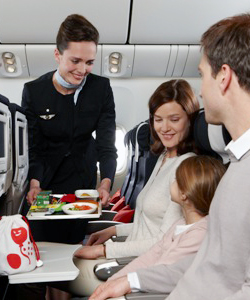 London – The recent trend of offering kosher food at airports where large numbers of kosher travelers pass through has now spread to London’s Heathrow Airport. The kosher fare is available at the WH Smith stores in terminals 2, 3, 4, and 5. Under the brand name DD’s, the food is produced by the well-known caterer Hermolis. It includes both meat and dairy sandwiches and wraps. The food is under the kosher supervision of the London Beth Din and Kedassia. Daniel, 22, said the obvious as he was choosing his sandwich: “I hope that people know about this so that they can support the program.” Travel experts in the US were saying the same for the kosher fare in places like JFK, Newark Liberty, La Guardia, Ft. Lauderdale and Boston. For many years, kosher travelers either had to lug their own food from home or stop off at a nearby restaurant. Daniel’s father, a salesman of watches, routinely packed crackers, tuna fish and cans of corn. To promote the kosher fare, Hermolis ran ads in the local Jewish papers and there was quite a buzz in some of the synagogues raising hopes that the airport kosher availability will continue to expand at major airports around the world.