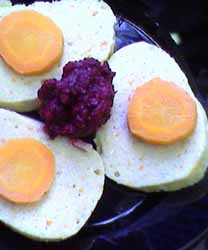 NEW YORK — Sushi may have taken the kosher world by storm, especially since 2000, and many prophesized that it would replace the traditional Gefilte Fish, but retailers say its predicted demise was premature. While sushi is most definitely here to stay and has become commonplace in most kosher restaurants and at catering events, Gefilte Fish is making a comeback, especially with younger consumers. Gefilte Fish is a basic staple in Ashkenazic (Jews from Eastern Europe) homes on the Shabbat and holidays. While Sefardim (Jews from Middle Eastern countries) did not adopt Gefilte Fish, there were some varieties such as Moroccan Gefilte Fish, in recent years produced by Manischewitz.

Made from a poached mixture of ground boned fish, such as carp, whitefish or pike, the fish dish first became popular in poverty-stricken Eastern Europe, where the ‘economic’ recipe  may have included extra ground and soaked matzo meal or bread crumbs creating many more “spare” fish balls. While some housewives still make the Gefilte Fish from scratch, most today either buy the jarred version with its iconic gel or the frozen loaves, made popular by such bands as Benz’s, Ungar’s, A&B, Freund’s, Ossies and others. Freund’s in recent years specialized in home delivery with a fleet of blue vehicles made to look like taxis.

At the recent Fancy Food Show, a relatively new brand Gefilteria raised some eyebrows. Launched by Liz Alpern and Jeffrey Yoskowitz, both 28 in 2012, the Gefilte Fish is already precooked and requires only thawing and draining of the water. To enhance the new gourmet gefilte fish, Gefilteria, manufactured in a facility in Northern New Jersey also developed Horseradish Carrot Citrus and Horseradish Sweet Beet. The two foodies who conceived of the “upscale” gefilte fish met at an event that featured noted cookbook author and New York Times writer, Joan Nathan, where Liz served as Joan’s assistant. Jeffrey, a pickler by trade immediately found that he and Liz shared a passion for the new product. As a startup, they began by producing the Gefilte Fish in their kitchens and delivering the product to select customers. Today, the product is widely available in many chains. Jeffrey plans to use his background as a salt-water pickler, including working at the Adamah organic farm, to introduce many new products. Gefilteria Gefilte Fish products are certified by the Orthodox Union.

One Brooklyn retailer when told about the product said: “Yes, Gefilte Fish is definitely in; first it was cholent, then herring, and now Gefilte Fish that is making a major comeback.”